I really went down to the wire with this challenge ...did I want to make a card, a box, altered art ...? Then suddenly I remembered an MDF frame I had bought in the January Sale, I found it in the Bargain basket ...looking a bit sorry for itself, more shabby than chic. 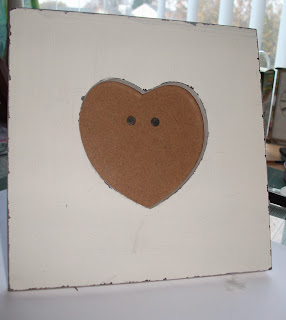 I saw Ali Reeve do the pva/paint technique to make a surface look weathered, it's good to be reminded of these tried and tested techniques, so I set to .. a layer of acrylic allowed to dry, a layer of cheap pva  and then another coat of acrylic then gentle heat applied with a heat gun until the top surface starts to split, unfortunately it doesn't show up very well in this photo, I just couldn't get the right light. I then brushed the surface with Antique Linen distress ink, to take away the modern bright white look because I knew what I was going to put in the finished frame. 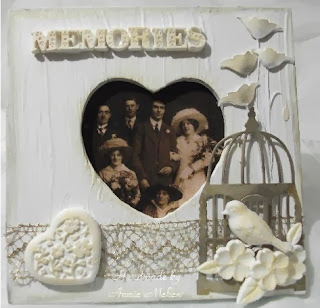 I used Martha Stewart paper clay and silicone moulds to create the lettering, bird, flowers and heart embellishment, again I brushed them with Antique Linen distress ink to age them. The cage is a Marianne die and the poppies were cut with a Memory box die.

The photo was taken on my Great Aunt Maud's wedding day in 1916 when she married William Bowland, months later on 26th March 1917 he was killed in Palestine and buried in Gaza Cemetery. Great Aunt Maud was never the same again, she died in 1953.

As a young child I was always told by my paternal grandmother that I should never go into the parlour ... but seeing the door ajar one day whilst I was there I crept in, the room was dimly lit with heavy drapes on the windows. I could make out a tiny wizened old woman in a bed ..at this point I was discovered and ushered out and given a real telling off. Many years later my Mum told me the sad story about Great Aunty Maud who had been so tragically widowed during the First world War, I asked if the woman in my grandmother's bed was Great Aunt Maud and of course she said it was, it seems she never recovered from the shock of losing her young husband and then she was struck down with Alzheimers Disease and had been cared for by her sister, my grandmother. I often wondered about William Bowland's grave being in such a volatile part of the world but over the recent Remembrance weekend  I saw an item on the Itv news showing Gaza Cemetery ... a very tranquil place that was being cared for by an elderly Arab man and his team of men. Every November 11th my mind goes back to that old lady ..(in fact she was not that old actually) and her sad story.

Well that's enough nostalgia for one evening, I'm off to upload to the Fussy & Fancy Challenge website where the new challenge is 'Hearts' plenty of scope there then, why don't you give it a go, it's easy to enter here:  http://fussyandfancychallenge.blogspot.co.uk/  and Good Luck